The Real Reason Energy Companies Have Been Going Bankrupt

The reason oil companies have gone bankrupt over the past few years is not due to "historically low oil and natural gas prices" as stated in this article.

Does the current price look historically low on an inflation adjusted basis?

Here is the chart not adjusted for inflation.

St. Louis Fed
Natural Gas prices are closer to the lower end of the price range. Below is the inflation adjusted long term natural gas price. 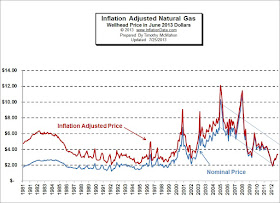 Inflation Adjusted Natural Gas
However, for as far back as the above data goes the price of natural gas is regularly between $2-4/mcf. This is the natural range. The higher prices have all been "spikes" due to hurricanes, La Nina events or other short term phenomenon.

Here is the non-adjusted price chart. As you can see these are not historically low prices.

St. Louis Fed
It appears the 2006-2011 period for oil and natural gas were HISTORICALLY HIGH prices. The opposite of what the article states.

Reserve base lending for unconventional reservoir projects became a ponzi scheme. This is how it works.

Step 1) An oil company borrows money or issues equity to drill a well.
Step 2) The well "discovers" oil. The reason I put discover in quotations is that the resource (not reserve, there is a difference) potential of shale source rocks has been known for decades.
Step 3) Estimate the resource and reserve potential.
NB: Resource is properly defined as uneconomic at the current price.
Reserve is properly defined as economic at the current price.
Step 4) Book the reserve as an asset on the balance sheet as per SEC legislation.
Step 5) Borrow money against the reserve.
Step 6) Drill more wells and book more reserves and borrow more money.
Step 7) Repeat until you cannot repeat again.

This process was not always a ponzi scheme. Before the mantra of peak oil and the fear the world as running out of oil this practice was done conservatively. But when the idea that world was short of crude supply the thinking became that oil was a one way trade. This gave Wall Street the confidence that lending money against high cost reserves to develop more high cost reserves was a sound practice. On the other side of the transaction little thought by producers was given to the scenarios that would cause these reserves revert to resources and be treated differently on their balance sheet.

Furthering the Ponzi scheme was Central Bank policies of zero percent interest rates. This cheap source of funds decreased the discount rates for cash flow streams, increasing the net present value and distorting the time value of money calculation for these type of projects.

Under this strategy developing more reserves meant more debt. When  prices reverted to the mean, reserves became resources and these companies became insolvent as resources are not the same quality asset as reserves and are treated differently under SEC legislation.

Exacerbating the problem was now these producers have to maximize cash flow to cover the interest cost which creates more excess supply and more downward pressure on prices turning more reserves back into resources impairing more balance sheets and strengthening the negative feedback loop.

The bankruptcies happening today are the result of historically high oil prices, a this time is different type thinking and central bank distortions, but not low prices.
Free Trader at 7:52 PM
Share